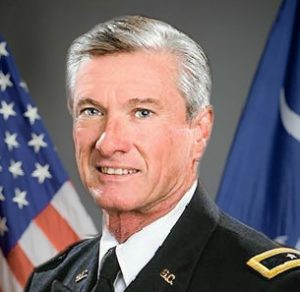 BG Lott, who has served in varying leadership and command capacities in both the S.C. Military Department’s Joint Services Detachment (JSD) and the SCSG, is a 43-year career law enforcement (LE) officer who has served as the Sheriff of Richland County for more than 20 years. Since becoming a Richland County Sheriff’s Dept. (RCSD) patrol officer in 1975, Lott has held a variety of LE posts including that of a sniper-tactical operator on the RCSD SWAT Team (Special Weapons and Tactics Team, one of RCSD’s predecessor tactical teams to today’s Special Response Team), a criminal investigator, a narcotics agent, a Narcotics Division lieutenant and captain, an administrative captain, a uniform patrol captain, and watch commander. In 1993, Lott became Chief of Police of St. Matthews. Three years later, in 1996, he was elected Sheriff of Richland County; a position he continues to hold having won multiple elections since.

Recognized as “one of the most creatively innovative, bridge-building law enforcement leaders in the nation, even internationally,” Lott has transformed the 900-plus-employee RCSD into a department geared heavily toward community-oriented policing with the county’s citizens being directly involved in all new deputy hires and with a strong voice as to what RCSD efforts and initiatives need-to-be going forward.

Lott’s RCSD is the only one of the six regularly featured LE agencies on A&E’s hit television series LIVE PD which has been with the program since it first aired in Oct. 2016. And RCSD is the first LE agency in the nation to establish a
pre-PTSI (post-traumatic stress injury also known as PTSD) conditioning program for deputies and other officers.

In 2010, Lott traveled to Erbil, Iraq – on the invitation of the Iraqi government – to help that country stand-up its first-ever female police academy. RCSD continues its strong relationship and an officer exchange program with Iraq,
as it does with other foreign LE agencies, worldwide.

In June 2018, Lott was one of four honorees inducted into the Fort Jackson Hall of Fame. Lott serves as president of the Association of the United States Army – Palmetto State Chapter. He serves on boards of the Employer Support
of the Guard and Reserve, the S.C. Combat Veterans Group, the Retired Military Police Association, and many others.

He is an Honorary Green Beret, Special Forces Association – S.C. Chapter.
Lott is the recipient of numerous awards, decorations, and honors, including the Order of the Palmetto, the state’s highest award. He holds myriad degrees, including a BA and an MA from USC-Columbia (he played baseball at USCAiken where he earned an associate’s degree) and an MA from Lander Univ. He is a graduate of the FBI National Academy, the FBI National Executive Institute, Harvard University’s John F. Kennedy School of Government, and
Furman University’s S.C. Diversity Leadership Academy.