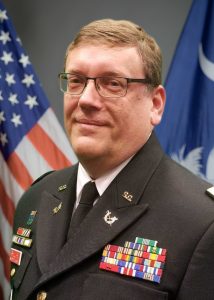 As SJA, COL Philips provides legal advice and guidance to the State Guard’s commanders and staff. At his direction, the Detachment provides attorneys to represent the State Guard in administrative and legal proceedings as well as providing liaison functions to other civilian and military organizations.  He also oversees pro bono legal work that assists current and former military members and their families.

COL Phillips was admitted to the South Carolina Bar in 1999. He clerked for the South Carolina Attorney General’s Office and the South Carolina Court of Appeals before entering private practice in 2001.  He has represented numerous individuals and business in a variety of legal matters and is currently the owner of The Phillips Firm LLC, Attorney & Counselor at Law. Prior to becoming an attorney, COL Phillips served in the United States Army as an Armor and Cavalry Officer in both Europe and the Middle East.